From the rugged shores of the Pacific Ocean to the vibrant bustle of Moscow, experience the vastness and variety of Russia. 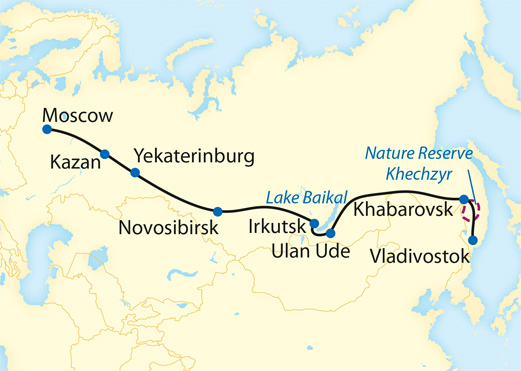 Day 1 Welcome to Vladivostok
In the morning you’ll arrive in Vladivostok. In the afternoon a guided bus tour of the city will include the Submarine Museum. You will have a fantastic view over the city from the “Adlernest” hill. Overnight: Versailles Best Eastern (or similar). (LD)

Day 2 Vladivostok
In the morning you’ll visit the Oceanarium with information about the Pacific sea life. Afterwards you’ll go on a boat excursion around Russia’s largest Pacific port. In the evening the regular train is departing and you will be welcomed in your compartment with a cup of tea. Overnight on board. (BLD)

Day 3 Khabarovsk on the Amur River
Today you’ll arrive in Khabarovsk. During the guided bus tour of the city you’ll visit the Regional Museum as well as the bluff over the Amur River, with its wide sandy beaches. Overnight: Parus Best Eastern (or similar). (BLD)

Day 4 Hiking through the Taiga
After breakfast you’ll go on an excursion to Khechzyr, an extraordinary natural preserve, that provides an opportunity to hike through the taiga along the shores of the Amur river. Overnight: Parus Best Eastern (or similar). (BLD)

Day 5 and 6 The wide Countryside
Today we head to the train station and continue our journey westbound, passing by Chita, site of the Trans-Manchurian Railway, the junction to the Baikal-Amur-Magistrale, the former penal colony of Svobodny, Birobidzhan and crossing the most fertile countryside east of Lake Baikal. 2 overnights on board. (2xBLD)

Day 7 Ulan-Ude
Arrival in Ulan Ude in the morning. You enjoy an informative city tour and visit the Old Believers Village. The religious group living here broke off from the Russian Orthodox Church centuries ago and favors colorfully painted wooden buildings and traditional dress. Overnight: Hotel Geser (or similar). (BLD)

Day 9 Lake Baikal
Today is spent exploring the remarkable natural phenomenon of Lake Baikal, the largest reservoir of freshwater in the world. In the morning your train travels directly alongside Lake Baikal, on the old route of the Trans-Siberian Railway. During two extended photo-stops, you have a chance to explore and record the scenic beauty of the lake and its setting. A short boat excursion from Port Baikal takes you out onto the lake. Take a swim in the lake, if you wish, and visit a picturesque Baikal village. Dinner is a Baikal-style picnic on the lakeshore with a view of the incredible natural surroundings (weather permitting). Overnight on board. (BLD)

Day 10 Irkutsk
In the morning, you arrive in Irkutsk, the capital of Eastern Siberia in tsarist times. Here you move into your hotel, which is centrally located. You can safely leave your large baggage on the private train. During your city tour you see the Okhlopkov Drama Theatre, the new memorial to Tsar Alexander III, and the photogenic market hall. Around noon you pay a worthwhile visit to an open-air museum with a focus on life and work in historical Siberia. Overnight: Hotel Irkutsk (or similar). (BLD)

Day 11 Trans-Siberia
After breakfast your train passes through the diverse landscapes of eastern Siberia. Talks on board inform you about the region and a vodka tasting with typical Russian snacks and red caviar is an opportunity to experience first-hand the Russian festive customs of hospitality and clever toasts. Overnight on board. (BLD)

Day 12 Novosibirsk
Around noon, your train arrives in Novosibirsk, the largest city in Siberia. You are greeted with bread and salt in the customary Russian manner and taken on a tour of this most Soviet of cities along your entire route, including the chance to see the mighty Ob River. Small City tour, with possibility to see the market and the opera house. Overnight on board. (BLD)

Day 13 Yekaterinburg
Your train stops in the afternoon in Yekaterinburg, the capital of the Ural Federal District. The city is known as the place where the Russian tsar Nicholas II and his family were murdered in 1918. During a tour you see the Cathedral of the Saviour on the Spilled Blood, which was built in 2003 to commemorate that tragic historic event, and the city centre attractively restored in 2009. Also, Yekaterinburg is the frontier between the European and the Asian continent, we visit the obelisque monument which serves as a reminder of this fact. Back on board, you enjoy views of the Urals landscape and indulge yourself in the dining car. Your private train is already rolling across the European continent. Overnight on board. (BLD)

Day 14 Kazan
After breakfast you reach Kazan, the Tatar capital on the banks of the Volga. On your city tour you see Tatar mosques and the most famous Russian Orthodox cathedral. You also take a tour of Kazan’s Kremlin, where you learn about the turbulent history of the relationship between the Tatars, the Cossacks, and the Russians. Afterwards you enjoy lunch in a city restaurant. Overnight on board. (BLD)

Day 15 Welcome to Moscow
Around noon, you arrive in the Russian capital of Moscow, now a thriving, prosperous city, and are accompanied to your first-class hotel. At noon you visit the Kremlin grounds with its magnificent cathedral. Several of the building interiors can also be viewed. After dinner, discover the city’s magic during an hour-long “City of Lights” tour, including a stop at Red Square, and a ride on the underground to view two of Moscow’s particularly beautiful metro stations. Overnight: InterContinental Tverskaya (or similar). (BLD)

Day 16 Tour of Moscow and Flight Home
After an ample breakfast at your hotel, your tour of the city takes you to the reconstructed Cathedral of Christ the Saviour, Lomonossov University, the New Maidens’ Convent (Novodevichy Monastery), and Red Square with its colourful St. Basil’s Cathedral, as well as to the notorious former KGB headquarters and the White House. This then marks the end of your memorable journey and the time has come to head to the airport. We accompany you to the airport and bid you bon voyage. (B)

Experience the Trans-Siberian Railway in all its glory on the full length of the legendary route: a combination of scheduled train from Vladivostk to Ulan Ude and a private train journey from Ulan Ude to Moscow.