The Legendary Silk Road: From Ashgabat

Journey the legendary Silk Road and travel through the ages—ancient and modern civilizations combine to create the adventure of a lifetime.

Please note: This itinerary is onboard the Orient Silk Road Express Private Train 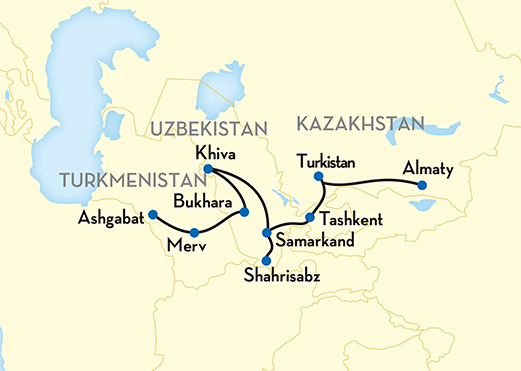 Day 1 Welcome to Ashgabat
On you first day in Central Asia, you arrive where the mountains meet the desert, in Ashgabat, Turkmenistan’s extraordinary capital city. You take the airport shuttle along newly-built, modern boulevards, past golden domes and marble monoliths to your hotel. Once you arrive, you make yourself comfortable, getting ready for the adventure of a lifetime. Overnight: Hotel Ashgabat (or similar)

Day 2 Ashgabat and Ancient Nisa
Amid the early morning bustle, you dive into the vast, dizzying delights of a typical Central Asian market. Scents mingle: rugs, piled spices, sheepskin, sizzling street food. Soon you leave the day’s deals behind and head to the ruins of the ancient city of Nisa, followed by a visit to the Ashgabat National Museum of History. After lunch, you continue to explore Ashgabat, its new marble buildings a gleaming display of the city’s oil wealth. In the evening, you board your private train and find your luggage ready and waiting in your personal compartment. You unpack and relax, then head for the dining car. Overnight: On board (BLD)

Day 3 Merv, the Ancient Pearl of the East
At daybreak, your private train draws into the ancient oasis of Merv. In the twelfth century, this was one of the largest cities in the world. Nourished by the Silk Road, its fame crossed continents. On your city tour, you are surrounded by magnificent ruins that rise up from the desert sand, crumbling arches framing a bright blue sky. You walk among the relics of this UNESCO World Heritage Site, which include the gigantic Tomb of Ahmed Sanjar, the Maiden’s Fortress and the so-called ice houses of Merv. Later, a local family invites you to lunch in the courtyard of their home. Next stop: Bukhara. Overnight: On board (BLD)

Day 4 Bukhara, the Noble
Beneath the imposing yellow brickwork of the Kalyan minaret, you gaze at the magnificent city gates on either side of the courtyard, each a powerful mix of intricate tile work and grand design. This is only a first glimpse of the Bukhara Historical Center, a UNESCO World Heritage Site, which is a city-museum filled with a thousand monuments, each a testament to the glory days of caravan trade. At the Lyab-i Hauz complex, you discover the 500-year-old architectural ingenuity that makes it possible to have a pond in the middle of the Kyzylkum desert. You learn about the Sufi Nasreddin, watch local dances, and listen to stirring Uzbek music. Overnight: Hotel Asia Bukhara (or similar) (BLD)

Day 5 The Samanid Mausoleum
Today, you spend another beautiful day exploring the infinitely rich Bukhara. After taking in the sumptuous tile designs of the Mir-i Arab Madrasa, you move on to the gorgeous geometry of the Samanid Mausoleum, one of the most highly regarded buildings in Central Asia. Later you discover the 1,500-year-old Ark of Bukhara, a fortress built around the fifth century. Standing on its immense rampart, you take a gaze over Bukhara, glistening turquoise and gold in the afternoon light. Overnight: On board (BLD)

Day 6 From Bukhara to Khiva
Today, you enjoy your final morning exploring the winding, romantic streets of Bukhara. After you say goodbye to this spectacular city, you board your private train for Khiva. Stunning landscapes pass by your window—wide steppes, blue sky, and distant mountains—the same natural beauty that inspired the ancients who came before you. Overnight: On board (BLD)

Day 7 From the Pages of 1001 Nights
After a delicious breakfast, you set out with your tour guide to explore Khiva, an ancient city filled with historic monuments. Beneath the vivid blue-glazed bands of the Kalta Minor minaret, you stroll through the city’s winding streets on a dreamlike tour of palaces, mosques, mausoleums and madrasas. You marvel at its mix of ancient and modern sights, vibrant and thriving—a living museum. Later, you have lunch in the king’s former Summer Palace. Overnight: On board (BLD)

Day 8 Samarkand, the Ancient
In Samarkand—one of the world’s oldest continuously inhabited cities—wealth, conquest and religion are intertwined. As you become acquainted with the splendors of this ancient city, you learn that it was considered the most beautiful in the world in the time of Timur. Today, it’s impossible to suppress your sense of wonder as you stand among the ornate marble buildings of Registan Square. The exquisite glazed tiles of the Shah-i-Zinda necropolis give you the same feeling. During a visit to the Afrasiyab excavation site, your tour guide discusses the origins of this astonishing city. Overnight: Registan Plaza Hotel (or similar) (BLD)

Day 9 Samarkand, the Magnificent
Today is another day to soak up the UNESCO World Heritage Site of Samarkand. You delve into its Islamic past and sift through the riches you find there. You watch in amazement as Uzbek craftsmen skillfully weave silk into carpets and press paper from mulberry bark. Later, you gaze into the the magnificent past with visits to the Ulugh Beg Observatory, the ruins of the Bibi-Khanym Mosque, and the impressive Gur-e Amir mausoleum. Overnight: Registan Plaza Hotel (or similar) (BLD)

Day 10 Shahrisabz, the Mighty
Under wide blue skies, you explore Shahrisabz, home to yet another UNESCO World Heritage Site. Timur—the fourteenth-century Mongol conqueror—filled the city with immense monuments to his success. Today, his palaces surround you in the bustling market of the city, crumbling reminders of a once great empire. Later, you watch a traditional folk performance and meet some locals in a small village. Before nightfall, your private train departs for Tashkent. On board, you join your fellow travelers for an Uzbek wine tasting in the dining car. Overnight: On board (BLD)

Day 11 Tashkent, the Green Oasis
Your private train rolls into Tashkent, a city studded with monuments that hark back to the Silk Road. You experience the lush, green oasis of the steppe and tour its caravanserais, fortresses and madrasah—history in earthen brick and turquoise tile. As evening arrives, you depart and travel the Silk Road trail to Kazakhstan. Overnight on board (BLD)

Day 12 Nomad’s Pilgrimage Center: Turkistan
As you eat breakfast, the glorious steppe unfolds outside the window to the steady beat of the railroad moving along the tracks. Soon you arrive in Turkistan, and stand before the magnificent Mausoleum of Khawaja Ahmed Yasawi, the vast, brightly tiled testament to power and beauty that UNESCO have made a World Heritage site and the Kazakhs revere as their national icon. It’s your last night on the train and your last dinner in the dining car. You bid a fond farewell to the staff as you roll on towards Almaty. Overnight on board (BLD)

Day 13 Almaty—The Father of Apples
Standing beneath the brilliantly colored patterns on the Ascension Cathedral, you gaze up at one of the largest wooden buildings in the world. It’s been a day of discovery, strolling through Kazakhstan’s capital of avenues and cafes, framed by the foothills of the Tian Shan mountain range. You see the circus, the wedding palace and the central mosque, and, in the evening eat a farewell dinner in a yurt restaurant. Overnight/day room: Rahat Palace Hotel (or similar). (BLD)

Day 14 Almaty—An Epic Journey Comes to an End
You catch the transfer for your flight home, leaving wide blue skies, the open steppe, and epic monuments behind you, laden with unparalleled memories of the Silk Road.

This compartment has sleeping berths (26.4 × 72.4 in /67 × 184cm) for up to four guests. A table near the window separates lower and upper berths on either side. Each car has nine compartments, with washroom facilities at both ends.

This compartment has two lower berths (27.5 × 74.8 in/67 × 184 cm each), as well as a table and additional storage space. Each car has nine compartments, with washroom facilities at both ends.

This category features two lower beds (27.5 × 74.8 in/67 × 184 cm each), a small table and storage space. Each car has eight compartments and a shower, together with washroom facilities at both ends. Guests in this category also receive one bathrobe per compartment.

This category features two beds, upper and lower (31.6 × 68.5 in/80 × 174 cm and 43.3 × 72.4 in/110 × 184 cm) These compartments also offer comfortable seating, a larger table and a small closet. Each room has its own private bathroom, complete with integrated shower. The cars in this category are comprised of just six compartments.

The Orient Silk Road Express’ grandest accommodation. The Kalif category features two beds, upper and lower (31.6 × 68.5 in/80 × 174 cm and 44 × 72.4 in/112 × 184 cm). Each compartment includes a closet, safe and private bathroom with a separate shower cabin. Each car in this category is limited to four compartments and a maximum of just eight guests.

Rates Include
Highlights Of Your Journey