From the vibrant bustle of Moscow to the rugged shores of the Pacific Ocean,
experience the vastness and variety of Russia on the world’s most famous train
route, the Trans-Siberian Railroad.

Day 1 Moscow: Welcome to Russia!
Day 2 Goodbye, Moscow! All Aboard!
Day 3 Kazan and the Kazan Kremlin
Day 4 Yekaterinburg and the Church of All Saints
Day 5 Novosibirsk, the Heart of Siberia
Day 6 Across Siberia on the Tsar’s Gold
Day 7 Lake Baikal and Listvyanka
Day 8 Irkutsk and Eastern Siberia
Day 9 Ulan-Ude and the Old Believers
Day 10 & 11 The Trans-Manchurian and Baikal-Amur
Day 12 Khabarovsk and the Amur River
Day 13 Khechzyr Nature Reserve and Hiking the Taiga
Day 14 Vladivostok and the Pacific Port
Day 15 Vladivostok: Farewell, Russia!

What makes your journey unique? 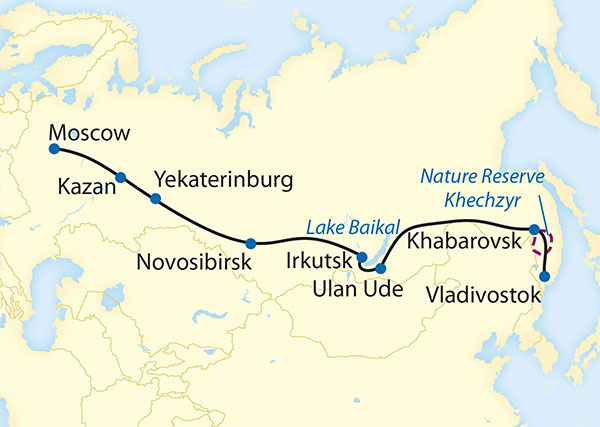 Day 1. Moscow: Welcome to Russia!
You are greeted at the airport by your friendly tour guide and accompanied to your hotel. Our City of Lights tour showcases the exquisitely illuminated Russian capital. You notice that Moscow is clearly on a par with Europe’s other great metropolitan cities such as Madrid and Paris. You stroll across the famous Red Square and take a short trip on the Moscow Metro to view several beautiful train stations known as the People’s Palaces. Overnight: InterContinental Tverskaya (or similar) (D)

Day 2. Goodbye, Moscow! All Aboard!
In the morning you take an informative tour of Moscow, which includes the imposing Kremlin grounds and its magnificent cathedral from Tsarist times. Later friendly train conductors welcome you on board with a delicious tea or vodka. As you settle into your private car, your train gets underway. Overnight: On board (BLD)

Day 3. Kazan and the Kazan Kremlin
In the morning you arrive in Kazan, the capital of Tatarstan. You take a tour of the Kazan Kremlin, a UNESCO World Heritage Site, with its wonderful panoramic view over the Volga, where you learn about the turbulent history of the relationship between the Tatars, the Cossacks, and the Russians. Your journey continues eastwards in the evening. Overnight: On board (BLD)

Day 4. Yekaterinburg and the Church of All Saints
Your train stops around noon in Yekaterinburg, the historical capital of the Urals. The city is remembered as the place where Tsar Nicholas II and his family were murdered in 1918. During a brief city tour you see the Church of All Saints, which was built in 2003 in commemoration of that tragic historic event. You also visit the city center, whose many buildings were painstakingly renovated in 2009. Back on board, you continue your journey through the vast steppes of western Siberia. Overnight: On board (BLD)

Day 6. Across Siberia on the Tsar’s Gold
You cross the wide Yenisei River and enjoy the journey through Siberia. A vodka tasting accompanied by Russian snacks and traditional toasts offers you a very enjoyable opportunity to combine pleasure and local hospitality. Your train passes by villages with their typical wooden houses and through birch forests set against a background of impressive mountains ranges. Overnight: On board (BLD)

Day 7. Lake Baikal and Listvyanka
After arrival in Irkutsk in the morning you take a bus to Lake Baikal, the largest freshwater lake in the world by volume. You enjoy a short boat ride on the lake and visit the village of Listvyanka. Dinner is served as a picnic on the shores of Lake Baikal (weather permitting). Overnight: Hotel Mayak (or similar) (BLD)

Day 8. Irkutsk and Eastern Siberia
In the morning you take an excursion to an informative open-air museum with a focus on life and work in historical Siberia. Afterward you drive back to Irkutsk, the capital of Eastern Siberia in Tsarist times. During your city tour you see, among other things, picturesque Siberian wooden houses and a memorial to Tsar Alexander III (the initiator of the Tran-Siberian Railroad), erected in 2003 where the Trans-Siberian Obelisk previously stood. In the evening your journey continues—next stop Ulan-Ude. Overnight: On board (BLD)

Day 9. Ulan-Ude and the Old Believers
After arrival in Ulan-Ude you are transferred to your hotel for the night. Afterward you visit an Old Believers village. The religious group living here broke off from the Russian Orthodox Church centuries ago and prefers colorfully painted wooden buildings and traditional dress. Overnight: Hotel Geser (or similar) (BLD)

Days 10 and 11. The Trans-Manchurian and Baikal-Amur
After breakfast you head to the train station and then continue further east, crossing the most fertile lands this side of Lake Baikal. You travel through Chita, starting point of the Trans-Manchurian Railroad; the junction to the Baikal-Amur Mainline; the former penal colony of Svobodny; and Birobidzhan. Overnights: On board (BLD)

Day 12. Khabarovsk and the Amur River
This afternoon you arrive in Khabarovsk. During the guided bus tour of the city you visit the Regional Museum as well as the bluff over the Amur River, with its wide sandy beaches and view of China. Later you enjoy a small boat ride on the Amur River. Overnight: Hotel Best Eastern Parus (or similar) (BLD)

Day 13. Khechzyr Nature Reserve and Hiking the Taiga
After breakfast you go on an excursion to the extraordinary Khechzyr Nature Reserve, where you have the opportunity to go on a short hike through the taiga along the shores of the Amur river. In the early evening you depart for Vladivostok. Overnight: On board (BLD)

Day 14. Vladivostok and the Pacific Port
In the morning you arrive in Vladivostok. A guided bus tour of the city includes the Soviet submarine S-56 museum ship, the picturesque central station, and a memorial to the foundation of the Trans-Siberian Railroad. In the afternoon you go on a boat excursion around Vladivostok Harbor, Russia’s largest Pacific port. Overnight: Hotel Best Eastern Versailles (or similar) (BLD)

Day 15. Vladivostok: Farewell, Russia!
After breakfast you are transferred to the airport for your flight home. (B)